In partnership with Wolverhampton Schools Improvement Service, we are proud to announce that not just one, but two Schools of Sanctuary in this city which was already a welcoming multicultural and multi-religious haven before the arrival of 21st Century asylum seekers.

“The important thing to remember is that this wasn’t just a box ticking exercise, this is part of our day to day practice”, said Tom Johnston, curriculum manager for Bantock Primary School.  “Our children can speak more than 40 different languages and come from a range of countries all across the world – Iraq, Libya, all across Eastern Europe – we have a lot from the Roma community too.  The children come here and they can’t believe how nice the school is compared to the one they came from.  That could be because of anything from the playground, children being nice to them, or getting support from teachers”.
Click HERE for the Express & Star article about Bantock School. 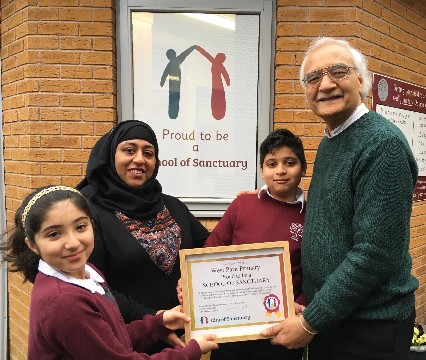 Revd Rachel Parkinson, Chair of Wolverhampton and Shrewsbury Methodist District, attended the West Park presentation:  “It was a real delight this morning to attend a special assembly at West Park Primary School in Wolverhampton.  West Park are the first in Wolverhampton to be recognised as a “School of Sanctuary”.  This involves having a thorough understanding of the concept of “sanctuary” and then embedding it into the school’s ethos and practices.  I cannot praise the school highly enough for the work they’re doing to make a safe, welcoming learning environment for pupils who, between them, speak 35 languages.  I spoke to some of the very impressive school “interpreters”….pupils charged with befriending new students, learning some words of their language and helping them, through sign language and conversation, to have a better grasp of English.  What great skills to develop!”

“In the assembly, some children and parents gave a moving account – using drama, song and shadow puppetry – of how Mohammed, now one of the parents at the school, fled Aleppo in Syria to seek sanctuary here.  The school also provides support spaces for parents, which is most valued.” 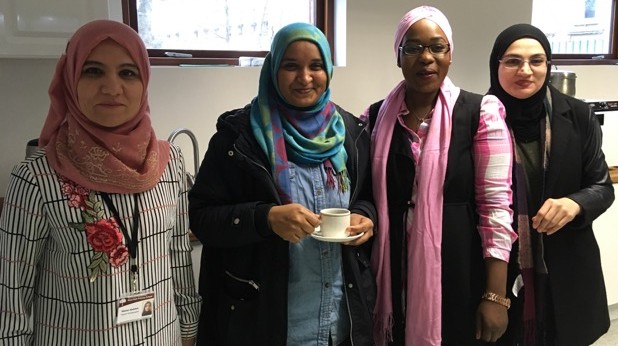 Members of the Parents’ Group

“Rev’d Inderjit Bhogal OBE, founder of the City of Sanctuary movement, presented the award.  Inderjit used to visit the school when he was a minister in Wolverhampton 30 years ago.  It was a visit by him in 2017 that inspired the school to seek Sanctuary status.  The whole school body had learned words underpinning the concept of Sanctuary:  ‘It is in the shelter of each other that the people live’. ”

Erik Pearse of Wolverhampton City of Sanctuary wrote to the school: “I just wanted to thank you for inviting me to the Award ceremony yesterday and to say what an outstanding event it was – extremely moving, really inspiring and imaginative and a cause for such hope for the future that young people should be so immersed and supportive and at ease in the exciting multi-cultural world we live in.  Wonderfully organised!”

You can see further feedback from visitors to West Park School Assembly here on the inspirational West Park Welcomes the World webpages which also describe the history project about the school.

Work continues to encourage other excellent Wolverhampton Schools to apply for the School of Sanctuary award.