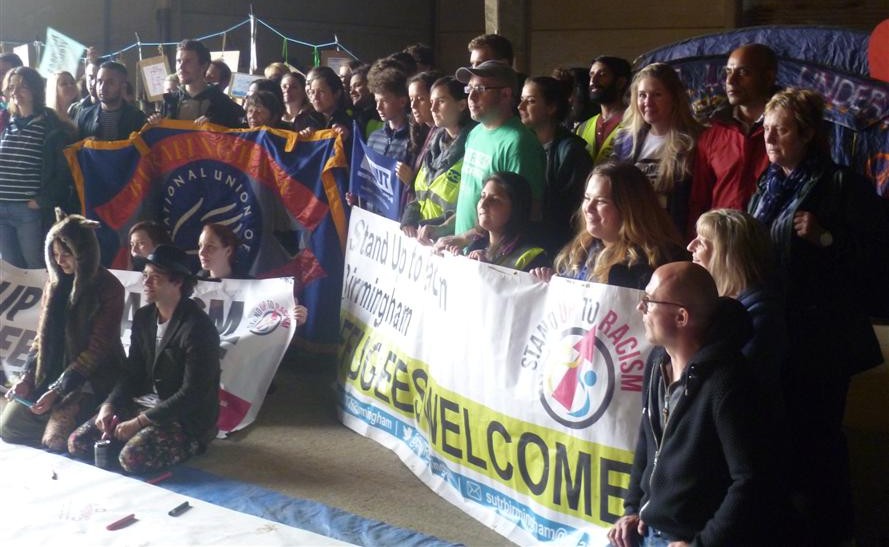 Photo – Our Coach Members in the Warehouse

My trip to Calais with Care4Calais

On Saturday June 18th, Louis Brennan, aged 14, joined with a coachload of adults from the West Midlands, in a national Convoy to Calais to express solidarity with the asylum seekers in the Jungle, the camp for 6,000+ refugees from war-torn countries seeking to cross the Channel to obtain sanctuary in Britain.

Why did you decide to join the Convoy to Calais?

I wanted to learn more about the situation in Calais, to become more aware of what’s happening there and why. Also to meet some of the children who are there.

How did the day work out?

We left from Birmingham at 6.30 a.m.
The security situation in France meant that our planned visit to the Jungle was forbidden by the French and British police at the last moment. The main convoy from London was stopped in Dover and not allowed to cross the Channel to Calais. However, as our coach was ahead of the convoy, we did make it to Calais. Security around ‘the Jungle’ was very tight so we weren’t able to go there.
Instead we went to the warehouse nearby where all the donations from the UK are carefully sorted by Care4Calais volunteers before they are distributed to the people in the camp. Any poor quality goods are set aside and returned to the UK.
We then went on to a large site rented for the day where a big rally had been planned for all those coming over for the day. We got back to Birmingham at 2.a.m.

Was it worth going?

Although we didn’t go to the Camp, I learned a lot on the trip. At the Rally, we heard from eight refugees, from different countries including Afghanistan, Pakistan, Iraq, Sudan, South Sudan and Eritrea. Some were so grateful to us for coming over to support them; others were angry at the conditions they had to live in and the loss of their dignity as human beings. I learned how all of them had had their lives messed up because of war. It made me realise how lucky I am to have been born in the UK and how, but for the grace of God, I could have been one of the asylum seekers.

What particularly struck you?

The fact that the rest of the convoy had been stopped in Dover and how this reflected the sort of world we live in. Also the anger expressed by one of the asylum seekers – I could see why he was angry.

Do you think the trip will make a difference to you?

Yes. When I hear the news, I’ll understand things better and be more interested. I think it was a great privilege for me to have the opportunity of going on a trip like this at my age.