Groups pledge to make Wolverhampton a City of Sanctuary 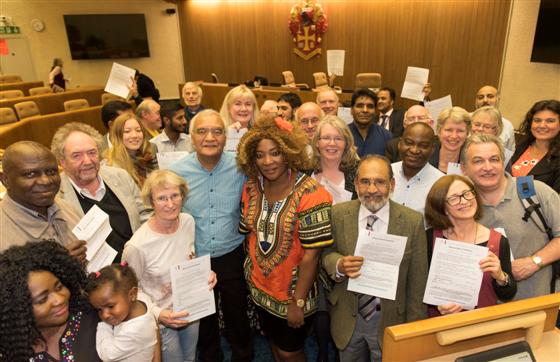 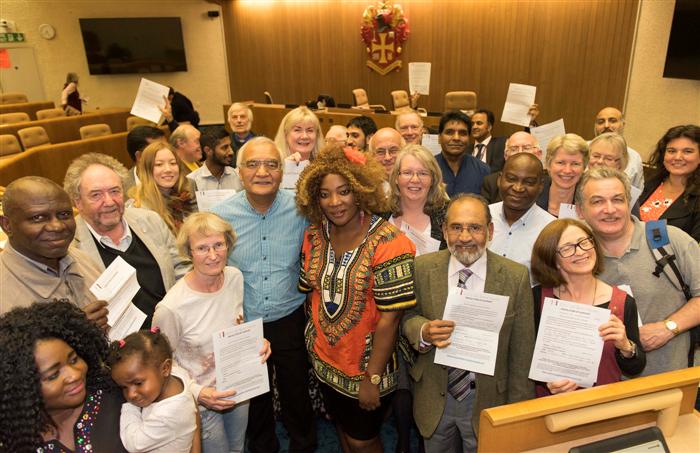 Stakeholders are supporting the creation of Wolverhampton City of Sanctuary

On the evening of Thursday 22nd September 2016, organisations and individuals came together in the Council Chamber of Wolverhampton Civic Centre to pledge their support to make Wolverhampton a City of Sanctuary.

Dozens of organisations large and small attended the event at the Civic Centre to hear more about the rapidly growing national movement which is seeking to build a network of towns and cities which offer hospitality to people seeking sanctuary in the UK.

“We want to secure a public commitment to making Wolverhampton a place of safety by bringing local groups and individuals together to make our city open and fair for all”.

“We also want to celebrate the contribution that asylum seekers and refugees can make to their local communities, and to wider society and culture, and challenge any hostility and discrimination they may face”.

During last night’s event, delegates heard the story of asylum seeker and chair of Wolverhampton City of Sanctuary Alvine Noumey, who talked movingly about how she fled persecution in Cameroon and finally found sanctuary in Wolverhampton.

Referring to the reaction she received from the authorities when she first arrived in the UK, she said: “People did not believe my story – but sometimes we need to believe and accept what someone says about what happened to them.”

The event also featured a keynote speech from Methodist minister Rev Inderjit Bhogal OBE, who founded the City of Sanctuary movement in Sheffield a decade ago, and who lived in Wolverhampton in the early 1980s. He said: “Sanctuary is not just about having a roof over your head, what people really need is friendship – we all want a sense of friendship and belonging”.

“There are 80 towns and cities of Sanctuary in Britain and Ireland and the movement is spreading around the world.”

A number of organisations made public pledges to highlight the practical and achievable steps they were taking to support asylum seekers and refugees.

They included Wolverhampton Homes, which pledged to support a drop-in centre for refugees through its staff volunteering scheme, and Walsall Borough of Sanctuary which vowed to work closely with the Wolverhampton group.

There were also public pledges from Humans of Wolverhampton, the Church of England, St Nicholas Church Codsall, the Wolverhampton Council of Mosques, and housing charity Hope into Action.

Leader of the City of Wolverhampton Council, Councillor Roger Lawrence, said: “Wolverhampton has a long history of welcoming people from all over the globe to our city, and as council we are proud to support moves to create a City of Sanctuary”.

“There are already many organisations and individuals working hard for refugees and asylum seekers who come to our city, but by formally working to establish a City of Sanctuary we are able to bring this support together and ensure that Wolverhampton continues to be a place that welcomes people in times of need.”

To find out more about Wolverhampton City of Sanctuary, please visit https://wolverhampton.cityofsanctuary.org/ .

As well as supporting City of Sanctuary, Alvine is founder of Alzec Vision, formerly known as the Migrant Empowerment Group, which seeks to bring people of all nationalities and backgrounds together, offering practical support and advice and helping them learn new skills and languages.

She was recently invited to Downing Street to speak about the work of the organisation, which helps hundreds of individuals and families in the local area. For more information, search “Alzec Vision” on Facebook or visit the website at www.migrantempowermentgroup.co.uk .

For a copy of the Pledge Form, click PDF-version or MicrosoftWord-version .